Everybody acknowledges vegetables as the most nutritious food you can eat. Aside from being packed with nutrients, vegetables are also natural and unprocessed. It just means that it poses no risk to our health, so it’s safe to get greedy when eating vegetables!

Usually, vegetable broth is used as a base for the recipe, and you need to have it to achieve the taste you’re looking for in a dish. However, your pantry may not always be in stock, and there might come a time when you don’t have a carton of vegetable broth to spare. Here are some alternatives to consider:

As vegetables are an essential part of any viand, so it became the vegetable broth. It is an ingredient that can be used in pasta, soups, dressings, and casseroles to make the dish ten times more nutritious and delicious. Here are our other recommended substitutes for vegetable broth to help you with your little kitchen ruckus. Read the descriptions of each alternative and see what’s the best one for your recipe!

You might find a bouillon cube lying around your kitchen if you’re missing vegetable broth. This tiny cube (usually wrapped in foil and sold in bulk) is actually just the dehydrated version of broth.

When using a bouillon cube, keep in mind that it’s also a lot saltier than the regular vegetable broth. Make sure to mix it into hot water until you find the right flavor, and don’t just dump the whole cube in your pot.

Besides being the best substitute, it’s relatively cheaper than buying vegetable broth. If you’re in the market and want to try something else that’s within your budget without sacrificing the taste of your dish, the bouillon cube should be your pick against vegetable broth!

Although homemade vegetable stock or broth should be the one topping the list, many would find it hard to produce this if you’re already halfway through your recipe. This option is for people who have some time to spare for prep.

A homemade stock might also actually be better than the cartons of vegetable stock itself, as it is fresh and newly-made in your home.

You can easily make this by tossing in your vegetables and spices in a hot pot of water, bringing it to a boil (just how the normal boiling process should go). The ingredients in this broth are very flexible, and you can just use what you think will fit well with your recipe.

The homemade vegetable stock should be one of the best options on this list, if only it doesn’t take a whole lot of minutes of boiling! 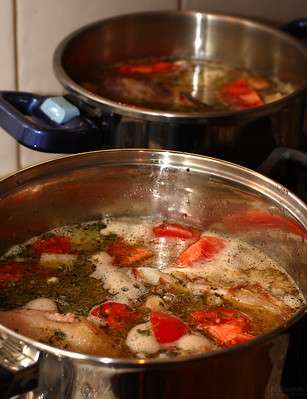 Another good substitute for vegetable stock is any of the two: chicken or beef broth. It may not be as good as the other two, as we have to consider the vegans.

Even if it almost shares the same savory flavor with the vegetable variant, it might not be preferred by others as meat has different nutritional values than the original ingredient.

You can either buy this stock in cartons from grocery stores or make your own by boiling your meat.

We can never leave out the seasoning stock for this list since we already mention every broth possible!

Although a seasoning stock is literally just made up of the spices you can find lying around your home, it still makes an excellent alternative for vegetable stock.

It’s quick and straightforward, unlike a homemade vegetable broth, and a vegan-friendly alternative, unlike meat stocks.

It’s relatively easy to make a seasoning stock. Mix in seasonings in hot water, and it’s good to use for your recipe. If you’re not knowledgeable about spices, the classics are salt and pepper! This might come as a shock, but your tomatoes can also stand in place of your vegetable broth! It gives off the umami flavor you’re looking for in stocks and broths.

Aside from that, it is very rich and has an unusually good meaty flavor despite being a fruit. It’s a good substitute for vegetable and chicken or beef stock while being vegan.

To prepare your tomato as an alternative for your vegetable stock, mix in a half cup of water with the same amount of freshly diced tomatoes or tomato sauce. You can also consider using tomato puree as 1 for 1 substitute.

Other than that, dried tomatoes can also be used by soaking them in boiling water first. It’s really easy to make, as you only need to have an equal part of water and tomatoes.

Only wine has a luxurious and intoxicating flavor that gives your dish a different kind of kick. It’s always used in cooking to give more depth to a viand without ruining the flavor.

The most it does is give a more potent flavor for the rest of the ingredients used, and it doesn’t even ruin the taste.

Various kinds of wine can be used, depending on how you want your ending taste to be. Red wine is a good substitute for vegetable broth when making meaty dishes, while white wine is good for soups and other liquid dishes.

It might be hard to use wine as a substitute as you need it to properly cook through if you don’t want the raw wine flavor to peek through the dish. This can be surprising but tea is also a good alternative for the missing vegetable broth that your soup recipe calls for!

Of course, tea is neither soup nor liquor.  It can be considered an infusion of brewed dried tea leaves in hot water. When making tea the tea leaves are placed in a container and hot water is poured over them.

They are then left for a short time to allow the flavor to seep into the water.[Source]

It is often used for an internal body cleanse and tastes very natural and herbal too. However, the taste of it can be quite different from vegetable broth and you may need to experiment around different tea leaves before you can get the right mix

Try to find jasmine or white tea if you’re making soups or for poaching recipes. Meanwhile, black tea is great for complex dishes.

Everyone uses soy sauce for cooking their favorite food. Unlike regular salt, soy sauce has a blend of salty, sweet, and umami flavors. It’s the best substitute for vegetable broth as it is savory with a dark brown color when added with water

Because soy sauce has a rich and salty flavor, you need to tweak your recipe a bit and add a lesser amount than what is called for.

You can dilute a tablespoon of soy sauce to a cup of water to weaken its strong pang. Other than that, you need to slightly increase the recipe’s cooking time as it has a different consistency from vegetable broth.

If you do not want to use soy sauce and prefer a healthier alternative, you can consider using coconut aminos. Coconut aminos are soy- and gluten-free, they are suitable for people allergic to soy or grain.

Coconut aminos is a dark-colored sauce with a soy-like flavor and similar to soy sauce, you need to slowly tweak your recipe when mixing with water.

Dashi is a Japanese type of broth, and not everyone might have it unless you come from a household that primarily practices the Japanese cooking style.

This alternative to vegetable broth is not accessible to all, and you might have an easier time looking for vegetable broth than Dashi. However, if somehow you have this in stock or have the ingredients to make it, feel free to use it!

To make Dashi that you will use as a substitute for vegetable broth, mix in a piece of kombu or seaweed with hot water and top it off with bonito or dried fish flakes

It’s probably not a surprise, but water is an excellent alternative for broth! It’s tasteless, so it wouldn’t harm the existing flavors. The other substitutes in this list already have a flavor on their own, and it might not match the taste of the actual vegetable broth.

You may like to consider adding a bit of salt so that the taste will still be close to the original vegetable broth!

There is a variety of miso paste in the market and they are normally used to make miso soup which has a similar savory taste to vegetable broth.  There is no harm in trying the other types of miso out there.

We recommend white miso which is generally only fermented for three months and made with a higher rice content. It boasts a mild, sweet flavor that is best for soups, sauces and dressings.[Source]

What ingredients should I use in making my homemade broth?

It is easy to make your own broth as the only thing you have to do is let it boil with the ingredients. So, what are the ingredients, you might ask? It entirely depends on your mood and your preference!

For the beginners in broth making, you usually add meat and bones with various spices to make a chicken broth. For a vegetable one, swap meat with vegetables. Want a broth that’s a little bit saltier than usual? Add salt or soy sauce. Conversely, you can also add less sodium.

Broth making is effortless. Find something to boil, add your favorite spices, and voila, the broth is ready!

Are there other stocks I can use as a substitute besides chicken, beef, and vegetable?

Definitely, yes! Any broth can be swapped in place of your vegetable broth. Though you can have any stock as a substitute, the only problem you’ll face will be the change in flavor and color of your final cooked dish.

For dishes that are trying to achieve a specific flavor, you might not want to change it for another broth. One example is chicken noodle soup. The menu literally calls for the taste of chicken, so you don’t want to change the base flavor of the broth unless you’re okay with making your noodle soup a vegetable noodle soup or beef noodle soup.

Are there any other substitutes I can try?

This one is a complex tip, but you can mix tea with soy sauce if you want to replace vegetable broth. It’s commonly used for dumpling soup. Other than that, mushrooms can also be used, like how we presented tomatoes. You can mix in mushrooms with tea, too!

As long as you have a liquid base like tea or water, you’ll be able to experiment with the flavor that you want.